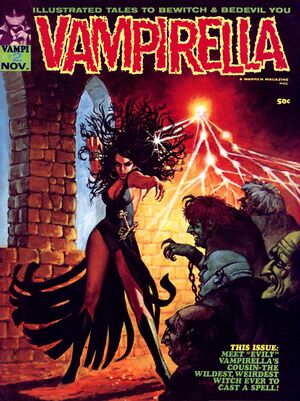 Evily is the supreme sorceress of Vaalgania. She reigns supreme as the master of the dark arts in Castle Evil, located in the Black Forest. In the eve of Halloween, Evily starts preparations for a grand ball that would take place at her castle and summons all the monsters and creatures that live in Vaalgania disguised as humans.

On Halloween, Evily unleashes the creatures into the world and commands them to bring them mortals so that she could take their souls. However, as she waits for her creatures to return, she learns from her Looking Glass that her reign is in peril by some unknown force.

Evily takes action and prepares an army of undead to protect her dark realm from any outside threat. Soon, her minions return with the mortals and Evily prepares to take their souls. However, among her minions is her cousin, Vampirella in disguise. Vampi reveals that she has come to claim Evily's throne, but the dark witch won't give up so easily. She attacks Vampirella with a spell to remove her powers, but her cousin turns into a bat and avoids the attack. The spell hits Evily's looking glass and it's reflected towards her. Evily loses her powers and becomes an innocent white kitty, but she promises to get revenge against her cousin, Vampirella.

Appearing in "Down to Earth!"Edit

Synopsis for "Down to Earth!"Edit

Vampirella arrives to Earth and signs up for the "Monsterella" contest. Thanks to her natural abilities and beauty, she wins the contest and is chosen to become the next movie star in a horror picture. Unfortunately, the plane on her way to Hollywood has a terrible accident and crashes. There are no survivors in the accident, but the authorities also report that several bodies were found completely drained of blood from their bodies.