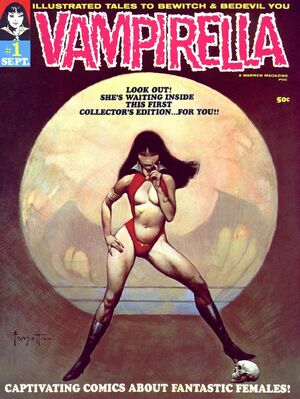 Appearing in "Vampirella of Draculon"Edit

Synopsis for "Vampirella of Draculon"Edit

There is a severe drought in Drakulon, where the water is actually blood. The residents of the planet are weakening without their precious vital liquid until a spaceship crashes on the outskirts of Gosi-Bram. Vampirella, the most daring citizen of Drakulon decides to investigate.

The Arthur Clark Expedition is a human spaceship that crashed on Drakulon and a couple of humans step into the strange world. Vampirella approaches the humans transformed into a giant bat, scaring them. The humans attack her and Vampirella strikes back, using her powerful bite against them. Vampirella realizes blood runs through the humans' veins and starved as she is, she sucks all their blood. Vampirella then steps inside the spaceship, where there are dozens more humans, hibernating in special capsules. The thirsty Vampirella can't resist the urge and she drains the blood from all the humans in the spaceship, in a literal bloodbath.