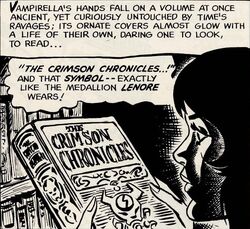 The Crimson Chronicles is an ancient tome containing dark magic and rituals, as well as the history of the conflict between Order and Chaos. It first appeared in Vampirella #8.

The Crimson Chronicles was found by Vampirella under the possession of The Cult of Chaos. The leaders of the cult intended to use the book in order to perform The Ceremony of the Second Soul and unleash the dark God of Chaos, Nuberus. Vampirella read the book and learned about the Cult's evil plan. She then confronted the cult and although she was too late to prevent the coming of Nuberus, the book was burned during the final confrontation.[1]

Vampirella then sough the few remaining copies of the book in order to produce the serum that would allow her to survive without drinking blood. She found one at Jethryn's Library and took it from the owner, who was a witch. After defeating the witch, Vampirella took the book with her on her journeys.[2]